IMPORTANT INFORMATION - LICENCE UPDATE
The Australian Communications and Media Authority (ACMA) have updated the Taree Licence Area Plan, which includes the allocation of a permanent community radio licence! ACMA acknowledge that we have been broadcasting for 20 years on a temporary licence, proving the need for another licence in this area.
Rhema's Board of Management has forwarded our application to ACMA.
Thank you for your prayers and encouragement at this time.
About Us
RHEMA FM is an incorporated body whose members are like-minded in the establishment of a Christian radio station in the Manning and Great Lakes area on the mid north coast of New South Wales Australia. The organisation is inter-denominational in structure and comprises a Board of Management of up to twelve people from various churches.
RHEMA FM is a non-commercial, non-profit community radio station which relies on the generosity of its members, together with "on-air" sponsorship. We are a faith ministry, focussed on changing lives for good through the delivery of a positive alternative in FM radio listening, by providing the very best of today's Christian music, along with programs to inspire, encourage, entertain and inform our community in traditional family and Christian values.
We need your support, firstly in prayer, as we are fighting a spiritual battle. We also need your financial support by becoming a member. May the Lord bless you as you prayerfully consider supporting this radio ministry.
Mission Statement
Our Mission Statement will clearly define the purpose and call of Rhema FM:
To establish and operate a radio station in the Manning Great Lakes area of the New South Wales Mid North Coast; broadcasting the reality of love and hope that is found in Jesus Christ and offering encouragement to all who might listen; broadcasting a balance of Christian music and programs promoting solid Christian and family values. To the glory of God and the expansion of His Kingdom.
Faith Statement
WE BELIEVE:
1. That the Holy Scriptures, as given by God, are divinely inspired, infallible (entirely trustworthy), and the supreme authority in all matters of faith and practice.
2. In one God, eternally existant in three persons, Father, Son, and Holy Spirit.
3. In our Lord Jesus Christ, God manifest in the flesh, His virgin birth, His sinless life, His miracles and atoning death.
4. In the bodily resurrection of Jesus Christ from the dead, in His personal return, and the judgement of the world by Him.
5. That all have sinned and are justly exposed to the judgement of God.
6. That redemption from the guilty penalty, and power of sin, is possible only through the death and shed blood and resurrection of Jesus Christ.
7. In the necessity of the work of the Holy Spirit to make the death of Jesus Christ effective to the individual sinner, granting him repentance towards God, and faith in our Lord Jesus Christ, enabling the believer to live a holy life, and to witness and work for Him.
8. In the resurrection of the body, the eternal blessedness of the righteous, and the eternal punishment of the wicked.
9. That every believer is baptised into the body of Christ by the Holy Spirit and thus being members of one another are responsible for keeping the unity of the Spirit in the bond of peace, loving one another with a pure heart fervently.
History
Much has happened with the ministry of Rhema FM, and more is to come in the future. Our on-air ministry has seen lives changed by the grace of God, and His Kingdom added to. Our quarterly newsletter and daily devotional "The Word For Today" and "Vision 180" have touched many lives. And our Rhema FM concerts are an instrument used by Him for His glory.
The Manning Great Lakes Christian Broadcasters was incorporated in September 1996. Studios were built at 51a Isabella Street, Wingham. Under the trading name of Rhema FM, temporary broadcasts began soon after under a temporary licence on 103.3FM. Much of the work was done by Graham Keene, who was both Station Manager and Chairman of the Board. He was assisted by his wife Gillian who was the organisation's Secretary.
From the very beginning, Rhema FM was staffed entirely by volunteers, and still is until this day. In 1998, Graham stood down as Station Manager, and was replaced by Mark Spencer (who remains Station Manager). Ken George became Chairman of the Board. Steve Smith followed him in that position, until current Chairman Don Emms continued that role.
After having not received a permanent licence, Rhema FM began broadcasting again on a temporary Broadcasting Licence on 106.5FM. This is renewed annually by the Australian Media and Communications Authority.
In July 2017, the studio was relocated after over 20 years to our new premises, about 100 metres down the road. 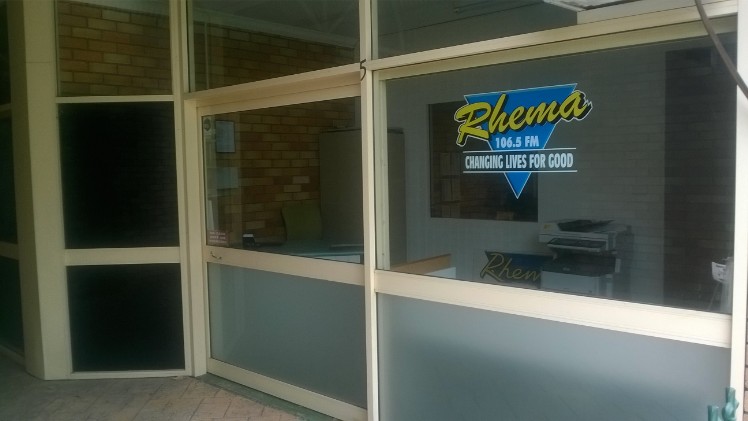 Visit Us
Come and visit us at our Rhema FM studios. We are at Shop 5, 97 Isabella Street, Wingham, which is at the rear of the arcade between "Bent on Food" and "Coffee on Isabella".
As we are staffed entirely by volunteers, it may be best to call first on 6553 0116.
Back to content